Kerbal Space Program 2 to Launch in Early Access on February 24, 2023 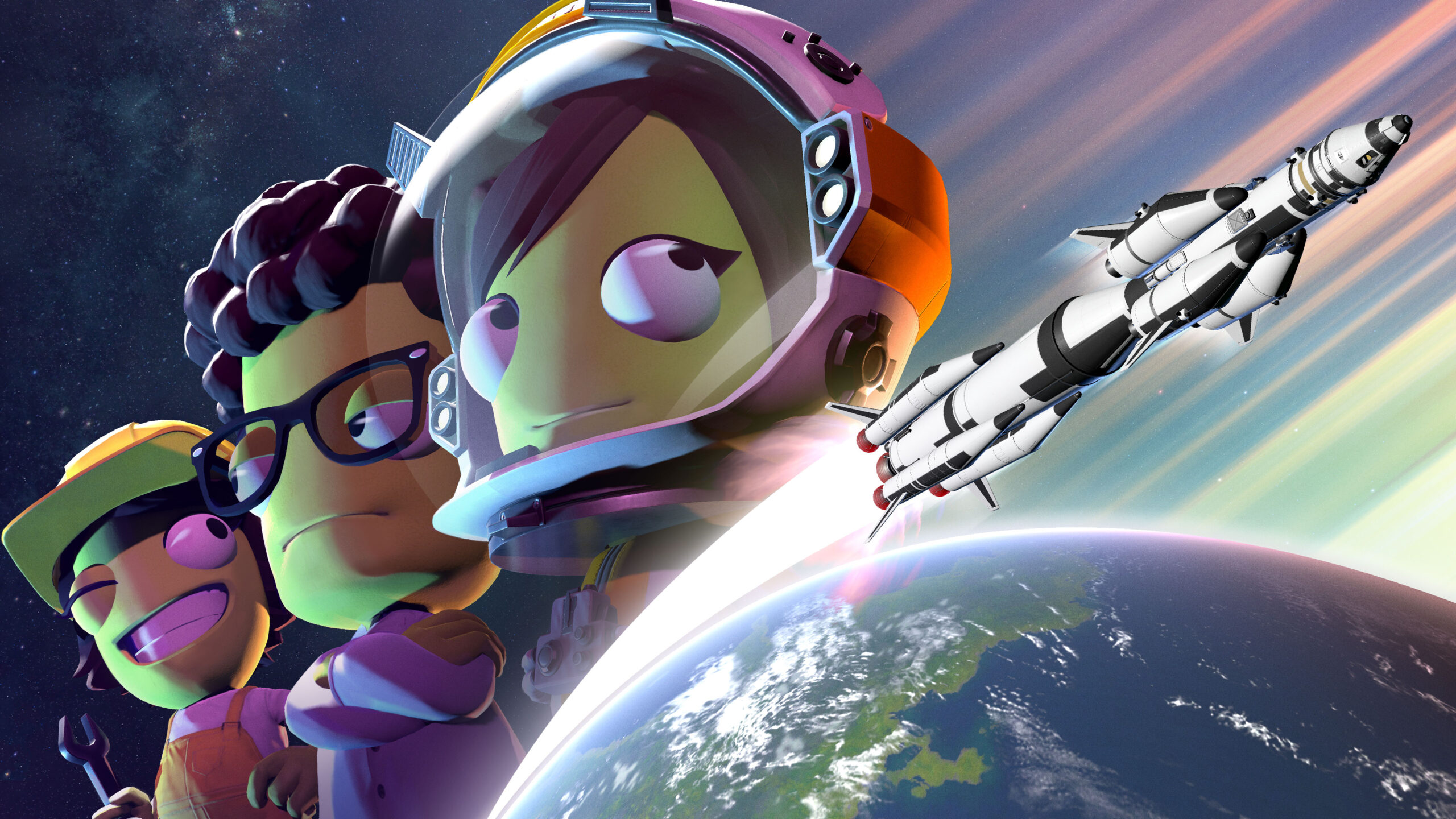 Private Division and Intercept Games today announced that Kerbal Space Program 2, the sequel to the beloved rocket building sim, will launch in Early Access on February 24, 2023 for PC on Steam, Epic Game Store, and other storefronts. Kerbal Space Program 2 will bring an array of content at the launch of Early Access for players to explore, including hundreds of new and improved parts to build a variety of vehicles and rockets; time warp under acceleration allowing for improved long-distance flights; and vastly superior graphics featuring a planetary atmosphere and terrain system to make this the most visually impressive KSP game yet! The game will also feature improved tutorials and user onboarding to provide players with the necessary knowledge to excel at space flight. Those that purchase Kerbal Space Program 2 in Early Access will help inform the future development of the game by providing feedback directly to its creators leading up to the full launch of the title.

The core experience will be better than ever in Kerbal Space Program 2, as players will have near limitless possibilities with the tools at their disposal to construct advanced spacecrafts and lunar vehicles. When the game launches in Early Access, there will be over 350 new and improved parts to build with, including engines, fuel tanks, procedural part systems, and much more. From this deep parts box, players can craft planes, rockets, rovers, and other creations for their adventures. Kerbal Space Program 2 will also introduce the ability to customize and paint vehicles, leading to deeper personalization and expression in every build.

In addition to this greater array of new parts, the game will feature rich environments to explore. At the launch of Early Access, players will be able to travel fully throughout the Kerbolar system. Blast off from the beautiful Kerbin, explore the pockmarked and breathtaking Mun, see the towering green clouds of Jool, and discover stunning vistas on these remade celestial bodies! All these classic locations have been reimagined, bringing all-new levels of realism and complexity through a terrain system that will provide new challenges when selecting a landing site. Fans will also enjoy sailing through beautiful cloudscapes thanks to the new planetary atmosphere system.

“We are so excited to release Kerbal Space Program 2 in Early Access because it will allow Kerbal fans to see for themselves all the amazing progress we’ve made as we reach the final stages of development,” said Nate Simpson, Creative Director at Intercept Games. “At its heart, KSP2 is about exploration, discovery, and conquering the force of gravity by adding more boosters.”

Built from the ground up, Kerbal Space Program 2 will teach the joy of accidentally learning rocket science to a new generation of players while providing unique challenges and innovative capabilities to seasoned Kerbal veterans. Fully-interactive animated tutorials will reveal the secrets of rocketry, while a revamped vehicle assembly interface combines ease of use and powerful new vehicle creation tools. The sequel will feature massive user experience improvements ranging from enhanced map and maneuver iconography to an all-new flight HUD. The time warp system not only includes more zoom levels, but it will also allow the player to pause time while interacting with controls. For long distance flights, players can now use time warp while accelerating, to remove long waits during interplanetary travel. Finally, improved contextual information will give players a better idea how to respond to unexpected vehicle failures.

“By releasing in Early Access, we are entering a new phase in which players get to experience greatly anticipated systems, features, updates and more as they come online,” said Nestor Gomez, Lead Producer for Kerbal Space Program 2 at Intercept Games. “We will be listening and seeing the reactions to these changes; and much like the original game, this journey will help us leverage a massively powerful tool: our passionate community.”

After Kerbal Space Program 2 launches in Early Access, Intercept Games will release multiple game-changing features throughout the proceeding months. Some of the highlights to come include:

Check out the lates Kerbal Space Program 2 feature video on YouTube to get insights and extra information about the game releasing in Early Access.

In the Kerbal Space Program franchise, you take charge of the space program for the alien race known as the Kerbals. You have access to an array of parts to assemble a fully functional spacecraft that flies (or doesn’t) based on realistic aerodynamic and orbital physics. Launch your Kerbal crew into orbit and beyond (while keeping them alive) to explore moons and planets in the Kerbol solar system, constructing bases and space stations to expand the reach of your expedition.

The original Kerbal Space Program, created and developed by Squad, released on PC in April 2015* and has sold more than 3.5 million units worldwide. The title has been widely popular with the media and consumers alike, earning a Metacritic rating of 88** and a Steam user score of 95%***. Kerbal Space Program 2, developed by Intercept Games, will be the sequel to the original game and the second in the series for the franchise.

Intercept Games is the developer behind Kerbal Space Program 2, the highly anticipated sequel the critically acclaimed space simulation game Kerbal Space Program. Comprised of a talented team, having shipped a multitude of titles across a variety of platforms, the team’s mission is to create incredible games that not only players will love but also reflect the deep values and commitment to excellence at Intercept Games. The studio aims to continue to provide unique games that not only entertain but can also inspire and make an impact for good.

Private Division is a developer-focused publisher that partners with the finest creative talent in the video game industry, empowering studios to develop the games that they are passionate about creating, while providing the support that they need to make their titles critically and commercially successful on a global scale. The Label publishes the Kerbal Space Program franchise, Ancestors: The Humankind Odyssey from Panache Digital Games, The Outer Worlds from Obsidian Entertainment, Disintegration from V1 Interactive, and OlliOlli World and Rollerdrome from Roll7, with future unannounced projects in development with Moon Studios, Evening Star, Piccolo Studio, Yellow Brick Games, and other esteemed independent developers. Private Division publishes the physical retail edition of Hades from Supergiant Games on PlayStation® and Xbox consoles. Private Division continues to build its internal studio capacity, with Roll7 and Intercept Games as internal developers for the Label. Private Division is headquartered in New York City with offices in Seattle, Las Vegas, Munich, and Singapore. For more information, please visit www.privatedivision.com.

Headquartered in New York City, Take-Two Interactive Software, Inc. is a leading developer, publisher, and marketer of interactive entertainment for consumers around the globe. The Company develops and publishes products principally through Rockstar Games, 2K, Private Division, and Zynga. Our products are currently designed for console gaming systems, PC, and Mobile including smartphones and tablets, and are delivered through physical retail, digital download, online platforms, and cloud streaming services. The Company’s common stock is publicly traded on NASDAQ under the symbol TTWO.

Statements contained herein which are not historical facts are considered forward-looking statements under federal securities laws and may be identified by words such as “anticipates,” “believes,” “estimates,” “expects,” “intends,” “plans,” “potential,” “predicts,” “projects,” “seeks,” “should,” “will,” or words of similar meaning and include, but are not limited to, statements regarding the outlook for the Company’s future business and financial performance. Such forward-looking statements are based on the current beliefs of our management as well as assumptions made by and information currently available to them, which are subject to inherent uncertainties, risks and changes in circumstances that are difficult to predict. Actual outcomes and results may vary materially from these forward-looking statements based on a variety of risks and uncertainties including: risks relating to our combination with Zynga; the uncertainty of the impact of the COVID-19 pandemic and measures taken in response thereto; the effect that measures taken to mitigate the COVID-19 pandemic have on our operations, including our ability to timely deliver our titles and other products, and on the operations of our counterparties, including retailers and distributors; the effects of the COVID-19 pandemic on both consumer demand and the discretionary spending patterns of our customers as the situation with the pandemic continues to evolve; the risks of conducting business internationally; the impact of changes in interest rates by the Federal Reserve and other central banks, including on our short-term investment portfolio; the impact of inflation; volatility in foreign currency exchange rates; our dependence on key management and product development personnel; our dependence on our NBA 2K and Grand Theft Auto products and our ability to develop other hit titles; our ability to leverage opportunities on PlayStation®5 and Xbox Series X|S; the timely release and significant market acceptance of our games; the ability to maintain acceptable pricing levels on our games; and risks associated with international operations.

Other important factors and information are contained in the Company’s most recent Annual Report on Form 10-K, including the risks summarized in the section entitled “Risk Factors,” the Company’s most recent Quarterly Report on Form 10-Q, and the Company’s other periodic filings with the SEC, which can be accessed at www.take2games.com. All forward-looking statements are qualified by these cautionary statements and apply only as of the date they are made. The Company undertakes no obligation to update any forward-looking statement, whether as a result of new information, future events or otherwise.